Lessons from the Ballpark: Fired by my Son 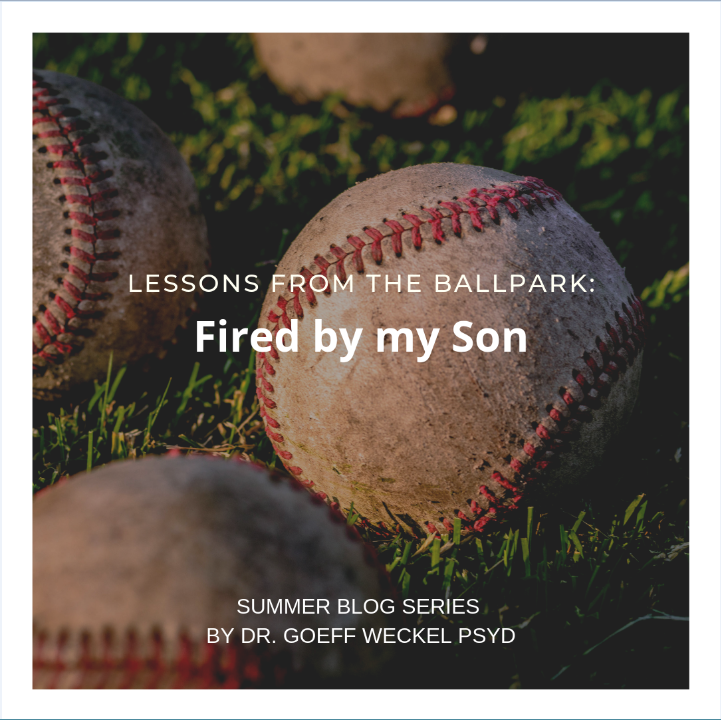 My 7-year-old son publicly fired me from being his baseball coach. I remember it like it happened yesterday. We were standing in foul territory, next to the first base line, close to the dugout. I thought we could get some reps in before the game started.  He, on the other hand, wanted to have fun with his teammates. He confidently responded to my request, “I don’t want you to coach me anymore!” It was the best thing he could have done for us.  Don’t get me wrong – I felt slighted. I remember immediately becoming enraged and thinking to myself, “How dare he talk to me like that!  He can’t fire me. I’m his dad.”

It took everything within me not to react, but he was right.  I needed to be fired by my son. I was placing unrealistic expectations on him.  In my mind he needed to be flawless as the coach’s son. His mechanics needed to be perfect. I was pushing him too hard. I had goals for him.  He was supposed to make the all-star team, which would naturally lead to him being drafted by the Texas Rangers. I confess … I put way too much pressure on my son and robbed him of the joy of playing a game.

Needless to say, I obliged my son’s request and stopped coaching.  Over the next couple of seasons I humbly accepted my demotion and learned to enjoy watching my son play from the stands. While sitting in the bleachers I learned how to be a father who appreciated the opportunity to watch my son have fun playing baseball. I stopped nit picking on his mechanics. I encouraged him after his defeats.  And I congratulated him on his successes.

As I became my son’s biggest fan it seemed that his enthusiasm for the game slowly returned. When I stopped pressing him he began to ask me questions about his game again. Our baseball relationship slowly returned to a balanced state.

After a couple of seasons as a spectator, my son actually requested that I return to the dugout. I cautiously accepted his invitation to coach again. I knew I needed to integrate my newly acquired skills as a supportive observer while maintaining a patient leadership role as a coach.

That next season was the best season I have ever had during my baseball career. I was able to connect with those boys in an indescribable way. It was as if we caught lightning in a jar. I had fun watching the kids play while they developed under my leadership. The boys were able to take their game to the next level.  Despite only having one previous “all-star” player on our team, we finished the season with the best record in the league and missed the league championship by only one game. I will forever remember the 2015 Orioles and the lesson I learned at the ballpark.  This Father’s day, remember to let your children teach you how to have fun.