Lessons from the Ballpark 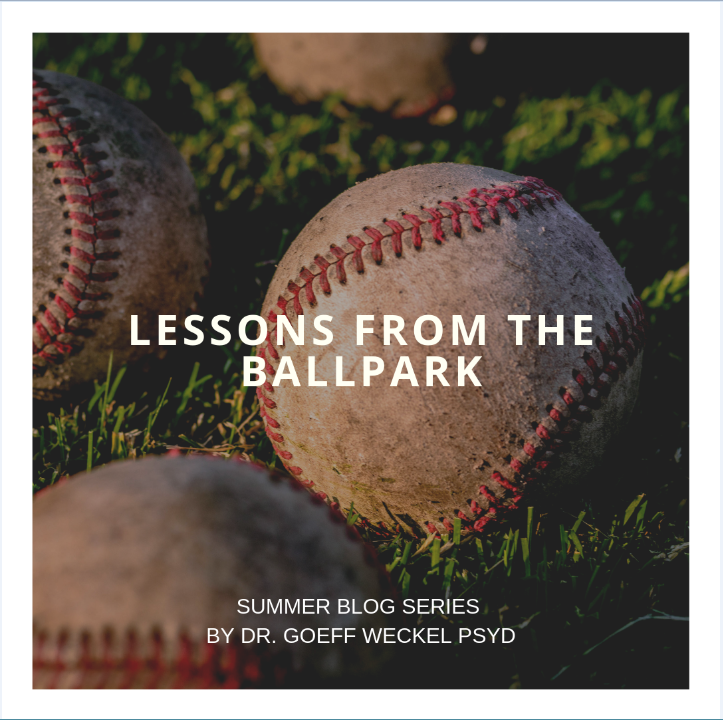 Yogi Berra, the famous New York Yankee catcher and manager, once said, “Baseball is ninety percent mental and the other half is physical.” I know Yogi’s math might not add up, but his proclamation continues to be appreciated by baseball players.  The fact that this “Yogism” is still repeated suggests that the statement must have some truth.

As a psychologist, I suspect you might be able to guess why I appreciate Berra’s quote. I believe his statement is also relevant to those of us who are not playing baseball.  Our experiences are greatly impacted by our thoughts.  In other words, “Life is ninety percent mental and the other half is physical.”

If you have ever sat with me during a session you know that most of my illustrations come from the game of baseball. This summer I am going to write a series of blogs called “Lessons from the Ballpark.” These blogs will use the game of baseball as an avenue to discuss the mental component of living an effective life.

Lessons from the Ballpark:

Chris Davis, the Orioles’ power hitting first baseman, started the 2019 season breaking a record. Unfortunately, his record is not something you would want your name to be associated with in the record books. It was not a record for the most consecutive home runs, shut out innings, successful steals, or base hits. His 0 – 54 consecutive plate appearances were the longest a Major League positional player has ever gone without getting a base hit. He may have gotten on base with a walk or reached base on a fielder’s choice, but he never recorded one single base hit.

Slumps are inevitable in baseball. However, Davis’ slump was historical.  He had not had a hit since the previous September. In other words, he had gone seven months or 210 days without getting a hit. This must have been a hard reality for Davis to experience. After all, he was an All-Star first baseman, finished third in the American League Most Valuable Player award in 2013, led the major league in home runs in 2013 and 2015, and is currently being paid $23 million by the Baltimore Orioles to hit the ball out of the ballpark. This mountain of a man from east Texas admitted that he broke down into tears during his slump and contemplated whether he should quite the game he dreamed of playing as a child. Needless to say, his hitless streak got to his head.  His slump became mental and he stopped having fun playing the game he loved.

Baseball coaches teach their players who are in a slump at the plate that they need to review the mechanics of their swing and get back to having fun.  Instead of focusing on results (e.g. base hits) or things outside of their control (e.g. game situation and umpire calls), they are taught to be mindful of the process.  In other words, focus on what they have control of – their swing. Ball players in a slump return to the details that they can influence.